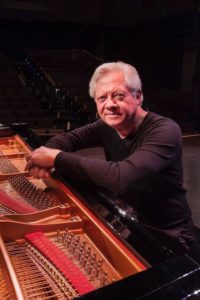 Jerome Gilmer is an eight time Emmy Award winning composer, producer and pianist from Denver, Colorado.  He has written and produced hundreds of original musical works for film and television, and his clients include many of the largest businesses in the US and internationally. Among his many projects are two that featured the voices of  country singer, Lyle Lovett and soulful Gospel  vocalist, Yolanda Adams – each of whom are recipients of four Grammy Awards.

Having grown up on the Gulf Coast, his musical roots run deep in jazz and blues with hints of classical music, country and Gospel.  He made his way through college playing for Mardi Gras and society bands along the coast, and earned a bachelors degree in jazz performance and a masters degree in composition from the University of Southern Mississippi.

Jerome funded his 1976 move to Denver with earnings from working on the Steven Spielberg movie, “Close Encounters of the Third Kind,” on which he helped create special musically coordinated lighting effects for the final scenes.  Since settling in Colorado, his music has been heard in markets across the country and internationally. His song, “This Is Colorado,” was for many years the de facto state anthem in the state’s school music programs.  He has created theme packages for the Colorado Rockies and the Denver Nuggets, and his works were prominent in the Olympic Winter Games in Nagano, Japan and the Goodwill Games here in the US.  He conducted and recorded one of the world’s leading film orchestras, Sinfonia of London, in the performance of his Iceberg Symphonic Suite. He produced a theme for the BBC’s “Summer Sunday” series and his theme and underscore for NBC’s award winning “News For Kids” played in over 150 markets throughout the US. As a contributor to the OmniMusic Production Music Library his work has been heard in programs around the world, including the Late Show with David Letterman Show, and one of his themes appeared twice in the movie, Borat.

In recent years Jerome has rekindled his love of the piano and returned to performing and teaching.  His solo piano album, Remember Well, was released in April 2013 and had excellent reviews and generated much support and praise from fans.  Hear it on Spotify or purchase on iTunes, Amazon or CD Baby.